Thailand’s leap into the Future

Thailand is introducing one of the largest investment opportunities in all of Southeast Asia, effectively preparing itself for the future. The government program is scheduled to run for 20 years, with a 40 billion USD in investments expected to come in during the first five years alone. According to Alexander Alles, COO of the Sanet Group in Bangkok, “This will allow Thailand to offer European companies promising investment opportunities with easy-to-follow guidelines.”

Anyone who knows a thing or two about the economy of Southeast Asia is well aware that Thailand is one of the most developed countries in the region. Its brilliant growth has been predominantly thanks to the Eastern Seaboard program, which has been sponsored by the government for more than 30 years.
This economic development has played a critical role in securing Thailand’s spot as the leading production location in ASEAN for the automotive, electronic, automobile assembly, textile and food processing sectors, as well as a number of others. Thailand’s industry hub comprises the 3 provinces east of Bangkok along the country’s eastern seaboard (hence the program’s name). Since its founding in 2004, Sanet has aided numerous companies in setting up direct investments in Thailand, also providing consulting regarding any relevant processes, ranging from initial conceptualization and company establishment to land acquisition and factory construction. 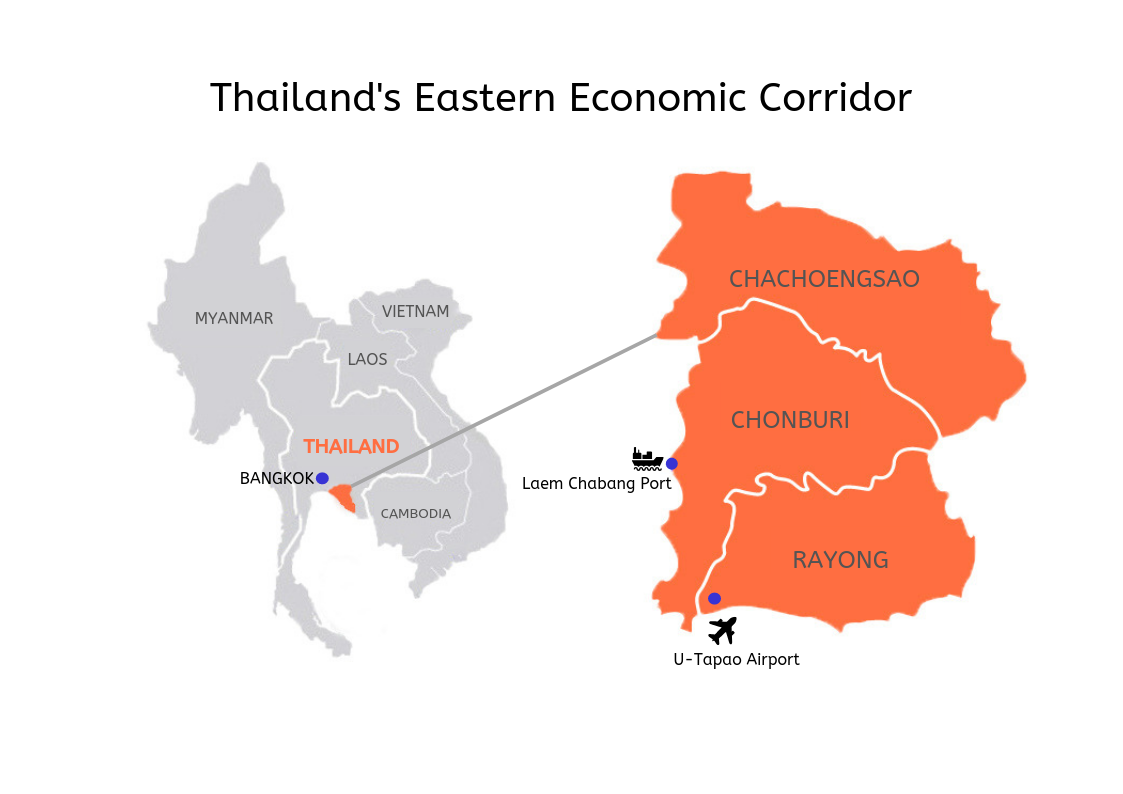 Wanting to avoid missing the proverbial boat of modernity, the Thai government has initiated Thailand 4.0, set to last over a period of 20 years. The program’s four main focus are: economic wealth, social welfare, human well-being and the environment.  Though Thailand 4.0 is to be implemented throughout the entire country, the program’s the economic core lies along the so-called Eastern Economic Corridor (EEC), the infrastructure and industry of which are scheduled for a fundamental overhaul. The government hopes to turn Thailand into an industrial center for all of ASEAN in the following branches: automotive, electronics, medical tourism and wellness tourism, agriculture, food processing, robotics, aerospace and logistics, bio-fuels and bio-mechanics, digitalization and an all-encompassing health sector. These industries will be developed with the help of a list of measures set in place particularly for this purpose. These measures offer four main paths to choose from:

A critical factor in the EEC’s overall development is connectivity. The government has explicitly stressed that both physical as well as digital connectivity are important, a fact which they plan to highlight by making it the focus of this year’s ASEAN Chair. Thailand intends to use its unique geographic positioning to become a central hub within the region. The EEC is to function as a junction between trade routes both east-west (Vietnam, Laos, Cambodia, Myanmar, India) and north-south (China, Malaysia, Singapore). 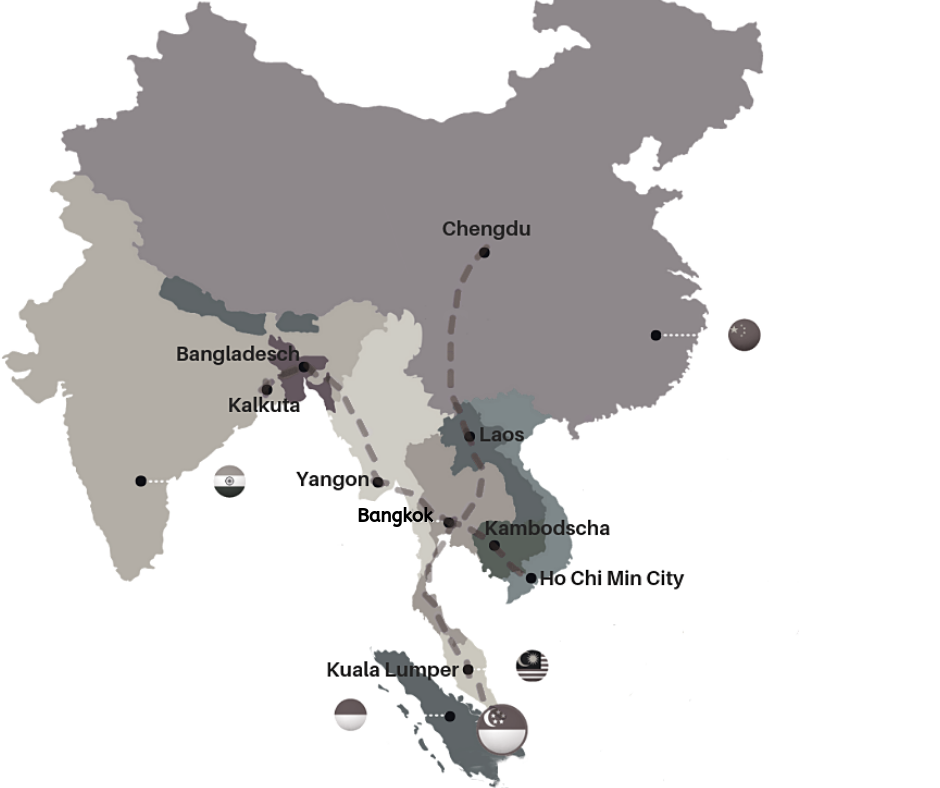 Infrastructural modernization is already underway. It includes the construction of double-tracked railways, the electrification of certain track stretches, investments for expansions to the highway system, as well as expansions for the deep-sea port, industrial areas and the airports. 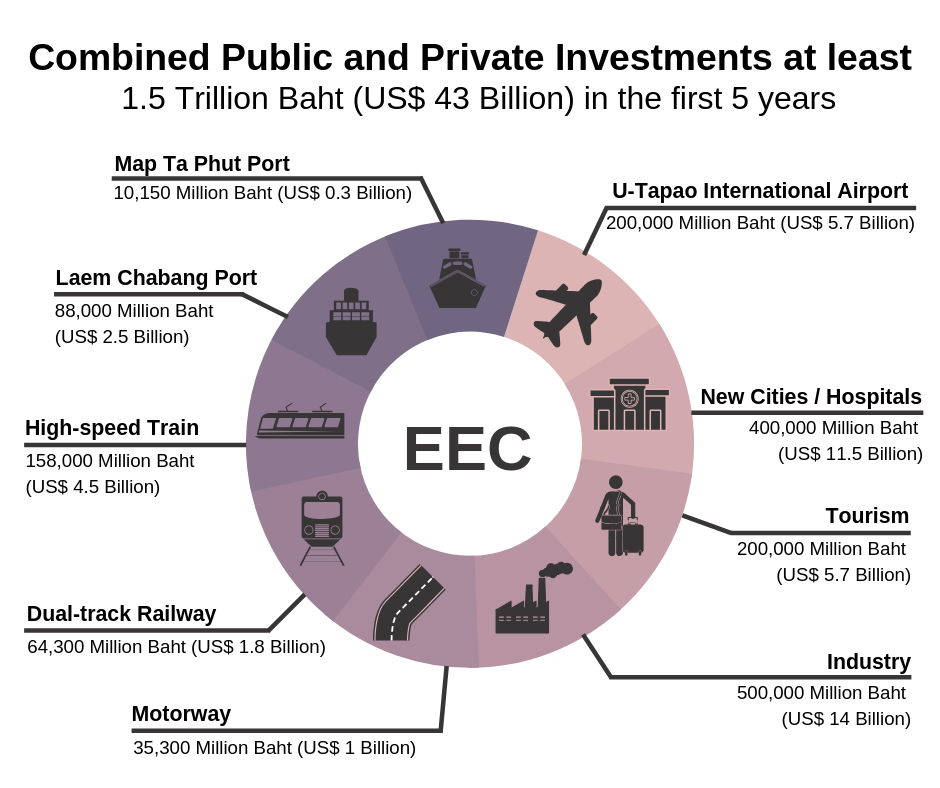 The economy of Thailand’s eastern seaboard grew at an annual rate of 7% for the first 20 years following the implementation of industrial development guidelines more than 30 years ago. It is this success which the government hopes to repeat in the present. Back then, the prime target investors came from Japan; today, companies are invited from all over the world to join in on the fun. The EEC is by far the most ambitious economic development program in Southeast Asia right now and it is set to deliver on its promise to lock in Thailand’s position as a leading industrial nation in the region.

As a leading industrial consultant in Thailand, Sanet is very experienced in helping companies from German-speaking countries get their businesses set up abroad. We look forward to hearing from you and would be happy to assist you in analyzing the market and preparing you for entry into the Thai market.